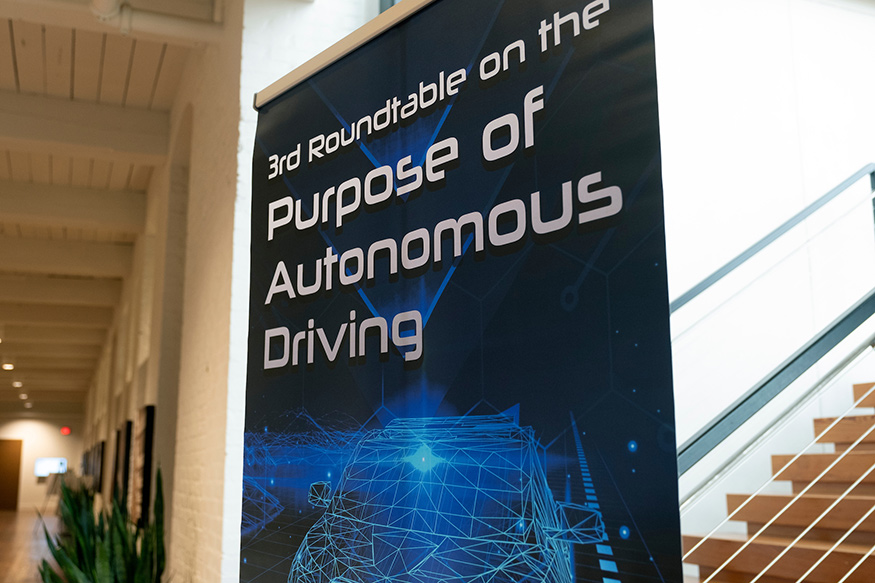 With participants from Germany, Japan, The Netherlands, South Korea and across the U.S., the conference brought together those on the forefront of research and development for the third Roundtable on the Purpose of Autonomous Driving. Presenters said advancements are certain to bring about continued changes not only for the driving experience, but for society at large, including policy, infrastructure and even cultural changes. While these new technologies offer the prospect of widespread adaptations for transportation systems, speakers noted that change has been continual since automobile makers first developed the “horseless carriage.”

Among keynote speakers, Ann Schlenker, director of Argonne National Laboratory’s Center for Transportation Research, discussed the many questions raised as researchers seek to examine interrelated factors, from population growth and population density to high costs and income inequity to new business models and many partnerships that are shaping the transportation industry. 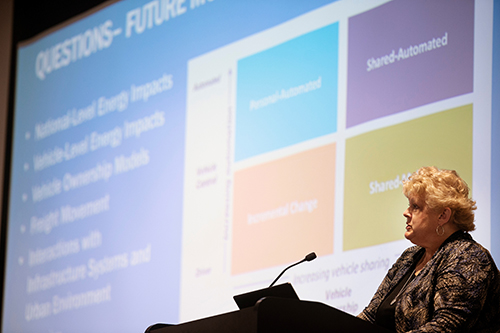 Ann Schlenker, director of Argonne National Laboratory’s Center for Transportation Research, gave an overview of the many questions and challenges facing researchers and planners in the development of autonomous vehicles.
Photo by Megan Bean
“I suggest that the solutions that sometimes are afforded into urban areas are not the same solutions that are necessary in rural or corridor areas. And as I come into this community here of 20,000 people or so, you can’t forget that fatalities are actually higher on rural roads than what they are in urban areas. It’s a different set of challenges, but every bit as important,” Schlenker said.

She added that in approaching transportation planning, “We can’t just think about personal movement and mobility as to how we get to point A and B; there’s more than that, with the goods and services that are delivered as well. The freight line is increasing exponentially.”

She explained that a systems look at smart mobility includes data regarding national-level energy impacts, vehicle-level energy impacts, vehicle ownership models, freight movement and interactions with infrastructure systems and the urban environment, among others. The human element, such as consumer behavior surrounding travel decisions cannot be overlooked in transportation research and development, Schlenker added.

Sanford Russell, head of NVIDIA’s Autonomous Driving Ecosystem in North America, said his company is now engaged with more than 370 organizations spanning the industry in pursuit of autonomous vehicle development. 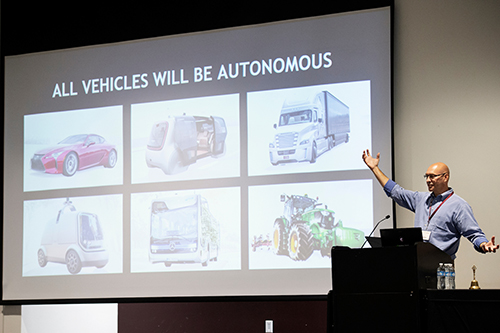 He discussed how developers graphically capture different environments and use those images to train “neural networks” as they build artificial intelligence technology.

“The big shift that happened a couple years ago was when we realized that artificial intelligence can solve problems that we, as humans, cannot,” he said.

Russell said that while there are virtually limitless scenarios of driving conditions, artificial intelligence can understand and interpret even edge cases to make determinations.

“Every 30 milliseconds, at 65 miles per hour, we’re taking in the entire world, creating it, understanding it and making decisions every two feet. And that’s barely fast enough. That’s why it takes a supercomputer,” Russell said.

“How do we have all the possible real-world events out there? That’s where software, simulation and clever engineering come in,” Russell said.

Clay Walden, executive director of MSU’s Center for Advanced Vehicular Systems, highlighted a selection of university projects, including research on pedestrian-vehicle interactions, the Halo Car project, and the development of the MSU Autonomous Vehicle Simulation platform with a heavy focus on off-road environments.

“For this to become a reality, for automations to move from lower to highest, an incredible volume of data must be processed in real time,” he said.

“Data may be the last part that engineering worries about, but artificial intelligence cannot work without the right data. You can’t use data unless you have data governance, a smart way to analyze this data, and access to the data,” Parisi said.

Yukiyo Kuriyagawa, associate professor of mechanical engineering at Japan’s Nihon University, said the trip to the MSU conference was valuable for grasping “the big picture of autonomous vehicles.”

Kuriyagawa said, “The small working groups included people from various disciplines and backgrounds. It’s good to know what they are thinking from those research points of view.”

The 2019 conference is scheduled to take place in Germany.