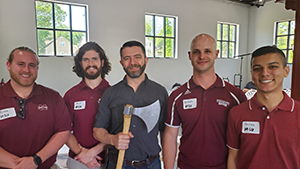 Although only in its first year, the competition saw 20 axe submissions from 17 university teams across the nation. Technical reports and performance tests on edge retention and sharpness were evaluated by a panel of judges, including Ben Abbott, a two-time winner of History Channel’s “Forged in Fire” and current guest judge on the show.

MSU’s submission, which was noted as one of Abbott’s favorite axes, was named the “Most Historically Accurate Viking Axe.” While measuring 30 inches in length with a 9-inch cutting edge, the axe only weighed 2.86 pounds. 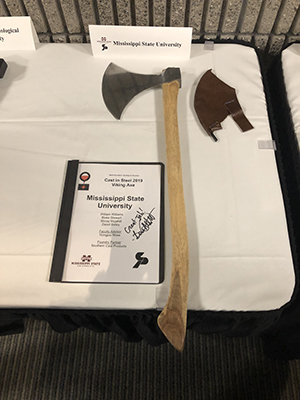 Cast in Steel 2019 Viking Axe Award Winners: William Williams, Blake Stewart, Shiraz Mujahid, and David Salley. Faculty Advisor Dr. Hongjoo Rhee.
Photo: Amanda Meeler
“The axe from Mississippi State was by far and away the most historically accurate axe that we’ve seen in this whole competition,” said Abbott. “The weight of it was nice and light, the shape of it was historically-inspired, and I really liked all of that.”

To view a video of performance testing and a detailed report of MSU’s axe submission, or learn more about Cast in Steel Competition, visit https://www.sfsa.org/castinsteel/.

MSU’s Center for Advanced Vehicular Systems in online at www.cavs.msstate.edu.