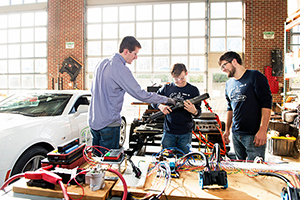 Photo by Beth Wynn
When members of the Mississippi State EcoCAR 3 team first laid eyes on their 2016 Chevrolet Camaro, it was easy for them to see it for the sleek sports car it was. However, they were far more concerned about turning it into the car it will become.

This template for the EcoCAR team's quest to build a powerful, fuel efficient machine is vying for top honors against 15 other universities in national competition. General Motors and the Department of Energy sponsor the four-year competition, now in its third iteration, with winners crowned each year following different phases of the contest.

In July 2014, the EcoCAR 3 competition began with teams spending the first year building theoretical performance and design models. This year, teams are testing their models and installing them into the car. From there, MSU team project manager Stephen Hayes said the competition will turn to fine tuning the machines, and ultimately, marketing their product and getting it showroom ready.

The team's 135 members consist of graduates and undergraduates of more than a dozen majors, Hayes said, and are divided into four subgroups – controls, mechanical, electrical and systems modeling/simulation.

For more information on the EcoCAR 3 team, visit the EcoCar 3 website.