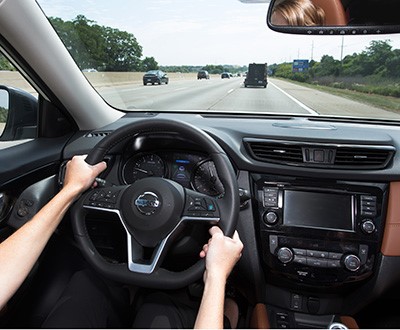 Nissan’s ProPILOT Assist technology is available on the Rogue compact SUV.
Photo Courtesy of Nissan USA
Driverless vehicles could be the next really big business disruption in the U.S. There are some futuristic projections that by 2030, more people will use driverless taxis rather than owning their own cars, which could be less expensive while making finding a parking space no longer a big hassle. It could also cut the number of vehicles on the road, and hence reduce commute times and the need for highway expansions.

There are also predictions that driverless vehicles could put many truck drivers out of business. The Long Beach Press-Telegram has reported that many believe automation can make the business safer, cut operator costs and address intermittent shortages of truck drivers.

“This is not the far future,” said Xiao Yun Lu, a research engineer at Partners for Advanced Transportation Technology (PATH) at University of California Berkeley. “This is the near future.”

“We are currently looking at a need of about 65,000 more drivers to fill current job vacancies and, if things don’t change, we could see a 175,000-driver shortage in 10 years,” Miller said. “As far as driverless trucks, the majority of the industry just doesn’t see that anywhere in the foreseeable future.

Hall Miller
“When you hear of autonomous trucks, what that is mainly describing is a driver assist event, meaning that the truck has technology on board that creates a safer and more efficient operating environment. Examples of that would be collision avoidance, lane departure, stability control or the onboard cameras that monitor the surrounding traffic and help coach the driver as well as record any critical events such as accidents or near misses.”

Miller said many of the trucks you see on the road today have these systems and you will see this technology become standard equipment in the near future. But none of this is being used to replace the driver.

“What is seen as more realistic is the use of technology in the future to relieve the driver of some control of the vehicle while he is still in it.” Miller said. “What was originally a big push by a number of companies to develop a driverless truck now seems to be more about developing better technology to assist drivers.”

Miller said there are still companies working on developing all the technology for a driverless truck as there will be some limited applications in certain environments but, ironically, the autonomous technology will most likely allow for growth in the driver population as it will help create a more attractive environment for those considering the occupation.

“You have already seen a significant movement in increasing driver pay, benefits and work conditions so this technology will only enhance the career path of drivers,” Miller said.

Trucking could be impacted more by automated vehicle technology than any other industry, said Matthew Doude, associate director, Center for Advanced Vehicle Systems (CAVS), Mississippi State University. A lot of trucking is done on interstate highways and long stretches of road better suited to automating some driving tasks. But for the foreseeable future, automated vehicle technology is not expected to cost truckers their jobs. Doude said it is more likely that automation might help make up for the shortfall in drivers.

CAVS does all kinds of self-driving car research. Its focus is on unstructured environments. This includes in the woods or desert-type environments where there are no roads. The primary applications are for the military, which is funding a lot of this kind of research. Doude frequently attends technical conferences on automated vehicle technology and has seen a trend in recent years to recognize that this is a harder problem than initially realized.

Matt Doude
“The base picture [of] fully self-driving cars [is] a lot harder than many people realize,” Doude said. “I think most of the engineers working on it probably were not the ones telling the newspapers self-driving cars would be out next year. The challenges are the variety of things that happen in the real world. No matter how many things we train autonomous cars on, bizarre things can happen on the road. As humans we have ability to deal with those kinds of thing. The type of artificial intelligence we have today is not capable of doing things it was not trained on and has never seen before.”

While there might not be widespread use of self-driving vehicles in the near future, Doude said it is conceivable to take a few blocks or part of a city and control that environment well enough that a given car could operate full autonomously in a postcard-size part of world.

“What is farther away is a one-size-fits-all self-driving car that does everything that we do with our cars today, but without human intervention,” Doude said. “That technology is decades away.”

Another issue is how self-driving cars in the future might impact auto sales. Now most cars are parked 90 percent of the time. Self-driving cars would have much higher utilization and would wear out faster. Overall, it might not result if fewer overall car sales, Doude said, because vehicles would have to be replaced much sooner.

It is possible that one day driverless cars will be manufactured by Nissan in Mississippi. Lloryn Love-Carter, who works in corporate communications for the Nissan Group of North America, said Nissan is working on autonomous driving (AD) technology development at various research and development centers around the world in conjunction with their Alliance partners.

“These AD technologies are being positioned and developed as a core component of Nissan Intelligent Mobility, Nissan’s roadmap for the technology and business evolution of the automotive industry,” Love-Carter said.

As part of Nissan’s program M.O.V.E. to 2022, the company intends equip 20 models in 20 markets with autonomous driving technology that can enhance safety while still having a driver in control. Love said they do not have a timeline for market introduction of fully autonomous vehicles.

“Nissan is proud to manufacture in Mississippi and Tennessee,” Love-Carter said. “We already manufacture vehicles with the semi-autonomous ProPILOT Assist feature at those plants (Nissan Rogue, Rogue Sport, Altima, and LEAF).”

ProPILOT Assist is a hands-on driving assistant designed to help drivers during long highway trips and the stop-and-go traffic of a daily commute. Use of a front radar sensor and a front-facing camera located behind the rear-view mirror, it can maintain a gap with the car in front of you at a preset distance and help to keep the vehicle centered during single-lane driving, even on slight curves.

The ProPILOT Assist system combines Nissan’s Intelligent Cruise Control and Steering Assist technologies and includes a stop and hold function that can bring the vehicle to a full stop, hold it in place and bring you back up to speed when traffic starts moving again.